I’m currently sitting in the airport about ready to board my first flight on what many people (including myself) might call a stupid trip.  I’m about to embark on a trip halfway across the world and back in less than 4 days.  I’ll be traveling a total of  53 hrs, about 37 hours of that in the air, and about 16 hours in layovers on 3 different continents.  That doesn’t even count the time I’ll wait at the airport prior to boarding my flights to the States and back.  Like I said, a stupid trip.  I’ve got my reasons, and I’ll get to those in just a minute, but first, here are the details (all times local):

It’s not pretty, but I’m looking forward to it.

It’s not pretty.  I’m quite interested to see how this goes for me.  I love to fly.  I really do.  Airports and planes are relaxing to me.  But at the same time, that’s a heckuva lot of flying in a very short time.  And the last time I flew from the States to the Middle East I was pretty much done with flying for a while.  And that was in business class.  This trip is all economy and there is even an extra layover.  There are really no signs that this is going to end up well except for… wait, there really are none.  I guess we’ll see.

So, when thought through logically, if this just seems like I’m punishing myself, why am I doing it?  Well there are 3 reasons, none of which alone makes this trip worthwhile, even in my slightly delusional mind.  Put them all together though, and it made enough sense (to me) to book that ticket.

First, American Airlines ran this somewhat ridiculous promotion that was supposed to be targeted to certain customers.  Somehow it was accidentally available to anyone who didn’t already hold status on American Airlines.  Anyone who signed up before they pulled the promotion got in on it.  It’s one of those things you sign up for whether you know if you’re going to use it or not, just in case.  The promotion allowed you to fly a greatly discounted number of miles to obtain status on American Airlines if you flew those miles between September 1st and December 31st.  As it turned out I had already booked both Dawn and my tickets to come home for the Holidays on American Airlines as it was the cheapest flight.  With that roundtrip ticket booked we’d already be flying over 16,000 miles which would give each of us Platinum status.  Usually you have to fly 50,000 miles in a year to earn that status.  There are some great benefits that come with Platinum status including 100% redeemable mileage bonuses, lounge access, extra baggage, priority boarding, etc.  So, all we have to do is take our holiday flights as planned – Dawn flying home for a little over a month over Thanksgiving and Christmas and me flying home for 10 days over Christmas – and all of a sudden we’ve got Platinum status.

But then again if I flew another 14,000 miles over those 3 months, I could go from being a Platinum member to an Executive Platinum member.  There are some small advantages to being an Executive Platinum over a Platinum member, but the big one is that you earn 8 System Wide Upgrades (SWUs).  These certificates allow you to buy any economy ticket on American Airlines, and then upgrade yourself to a business class ticket.  All it would take to make Executive Platinum would be one more simple little trip back to the States.  Actually, it could be to any number of different places, but it had to be on American Airlines or a couple of their OneWorld partners per the promotion fine print.  As I knew I was headed home for Christmas I searched for a flight to Hong Kong, Australia, and all kinds of other places that would get me those miles at a decent price.  I soon realized that the best option to fly those miles at a decent price in a short amount of time would be to head back to the States.

So I began to search.  I stumbled upon almost the same exact routing that I’d be taking home for Christmas over the weekend after Thanksgiving for only $885 roundtrip.  It’s not a great true mileage run price in terms of cents per mile, but for this particular situation it really couldn’t have gotten any better.  Typically, I’ve seen flights back to the States from Doha anywhere from $1200 – $1800, so this was really an incredible price.  The fare was only available for flying over that weekend after Thanksgiving.

At this point I loved the idea of buying the ticket, but I still couldn’t totally justify it.  $885 to be home for only 40 hours?  Yeah, I’d get the upgrades to use next year, but would I actually be able to use them?  Hopefully, but maybe not since they have to be used on AA metal.  By buying the ticket I’d already be Platinum by the time I took the December flight.  With the 100% mileage bonus on that flight and the miles from this flight I’d earn $640 worth of AA miles back (if I value AA miles at 2 cents per mile), maybe more depending on when my Gold status shows up.  So, if I wanted to, I could justify it that way.  But, then again, who knows when I’ll be using those AA miles and if I’ll really get that value out of them (especially now with an impending devaluation coming – which I didn’t know about at the time).

The real kicker would be that I’d be able to surprise my parents for Thanksgiving dinner.  Sure it’d be the Saturday after, but we’ve celebrated Thanksgiving on that Saturday plenty of times in the past.  Being able to get the entire family together for Thanksgiving while I’m living so far away was too good of an opportunity to pass up.  Plus, Dawn thought it was a good idea.  If she was buying into my madness I pretty much had to book that ticket.  After kicking the idea around for about a day (slightly risky as the flights might not have still been there the next day) I booked it.

Once booked, I let my brothers know I was headed home.  I got them to set up a Thanksgiving dinner with my parents for the Saturday after Thanksgiving.  Stephen was already working on Thanksgiving, so it was a pretty easy to get them to bump back the family dinner until Saturday.  As long as they had my parents all booked up I didn’t have to worry about them making other plans for the day.  Dawn was going to be in Iowa with her family for Thanksgiving, so she is planning to drive back on Friday to pick me up from the Airport and then drive to my parent’s house to surprise them there.  It’s a pretty epic trip in a lot of ways, and I’m quite excited about it.

I’m now sitting in an American Airlines Admirals club in Chicago a little halfway through my trip.  So far, the trip has certainly been more than worth it.  The flights in weren’t too rough, and I got a decent amount of sleep on my BAH – LHR leg.  Thanks to the new American planes in flight entertainment (IFE) I was able to catch up on 4 or 5 movies, plus a couple of TV shows.  My goal of staying on Qatar time throughout the trip hasn’t panned out so much, but I’m not hurting too bad yet.  I hear flying East is tougher than flying West, so we’ll see how it goes when I get back to Doha tomorrow night.

Surprising my parents was great, and their reactions alone were worth the trip.  To say they were shocked would be a bit of an understatement.  Getting to spend the holiday hanging out with my brothers, my brother’s wife, and my nephew, when we live so far away is priceless.  Being able to split up the time my wife and I are apart over her thirty some days in the States certainly made the trip even more worthwhile.  It’s pretty incredible to think what we can do these days in terms of travel, and I’m so blessed I’m able to take full advantage of it by spending valuable time with my family. 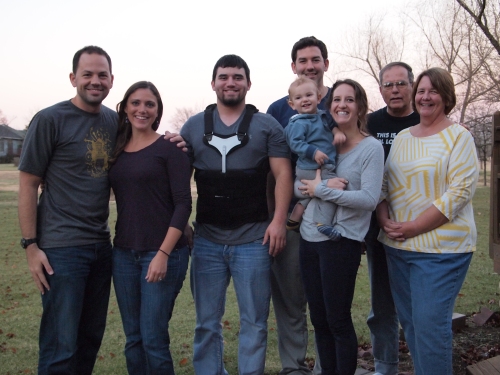 Well worth the miles flown

So far, it seems that my pseudo mileage run has been quite successful in multiple ways.  Lets hope these last couple of segments go well.