Cambodia and Vietnam in Style

If I’ve learned anything from my time in the miles and points world, it’s if you can’t get what you want, hang up and call back.  If I’ve learned two things, the second would be jump on a deal quickly when it comes up because it may not last long.  I’ve read quite a few stories about dirt cheap mistake fares and incredible mileage redemptions, but I was never able to take advantage of any of them.  That was until a couple of days ago.  I read about a deal that might actually work out quite well for Dawn and me.  It certainly wasn’t as lucrative as some of deals I’ve read about previously, but I also felt more confident that this particular deal would be honored and the tickets wouldn’t be cancelled. 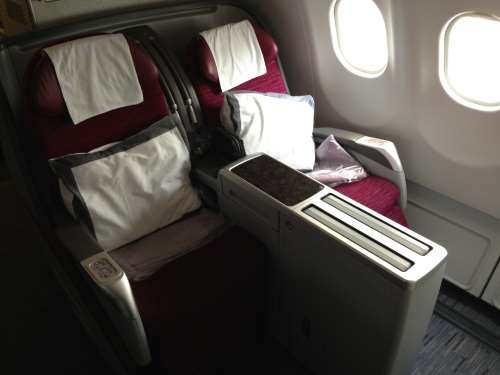 Looking forward to flying in one of these seats again soon.

The basic summary of the deal is that you can get a one way ticket from Phnom Penh (PNH), Cambodia to Ho Chi Minh City (SGN), Vietnam for only $245.  The two cities only require a 40 minute flight to travel from one to the other, and so it appears that flights between the two cities are typically fairly inexpensive.  The kicker for this particular deal is that for $245 you can fly through Doha (DOH) to get there, which just so happens to be about 3600 miles away.  And it’s in Business Class.  I found the deal from reading View From the Wing, and Gary does an excellent job explaining the details of it here from the perspective of mileage running.  As I’m not really into mileage running, I’m much more interested in the fact that this deal allows us to visit a couple of places that are quite high on our travel list – Vietnam and Angkor Wat in Siem Reap, Cambodia.

The fare doesn’t get me to Cambodia; it only gets me home from Cambodia and onto Vietnam.  Also, it only allows you to book that one way flight from PNH-DOH-SGN for $245 if you have less than a 24 hour layover in DOH.  The price bumps up to $430 if you take a stopover (anything longer than 24 hrs) in DOH.  Being based in Doha and not really feeling like back to back 11 hr and 7 hr flights I opted for the ‘pricey’ option of a 2 month stopover in DOH.  This allows us to spread out our 2 trips and not just hang out on planes all day (although I might enjoy that – Dawn, not so much, even in business class).  We’re headed to Cambodia in mid-November and Vietnam in mid-January.

So after I booked our flight from PNH-DOH (November) and our flight from DOH-SGN (January), it was time to figure out how to get to Cambodia, and how to get home from Vietnam.  Originally, I thought I’d be able to book SGN-DOH-PNH (the opposite of the first flight I booked) for the ‘deal’ price, but I couldn’t get it to work out.  Eventually, I gave up and just booked PNH-DOH-SGN again to return from Vietnam in January.  Since PNH is in Cambodia and not Vietnam we’ll have to book ourselves a separate, cheap flight from wherever we are in Vietnam at the time back to PNH before our long haul business class flight home to DOH.  Once we arrive in DOH, we can either hop on the next segment of the flight to SGN or we can just conveniently miss that segment of the flight… and then head back to our apartment in Doha.  As that last segment from DOH-SGN isn’t as important to us, I was able to book the ticket for the lower, non-stopover price of $245.

So, now that our return from Vietnam is taken care of, I just need to figure out our ticket to Cambodia.  Since the main focus of the trip is to visit the ruins of Angkor near Siem Reap (REP) I’ll probably book our flights from DOH-REP.  That ticket is looking like it’ll cost around $700.  We’ll spend a few days there, and then fly the 45 mins to PNH (about $130).  There will be plenty to see and do to fill up a 4-5 day trip between both places.

For the Vietnam trip, with both the long haul flights there and back booked, all we have left to figure out is what to do with our 10 days there.  We’ll certainly spend a few days in Ho Chi Minh City, and since Halong Bay is on Dawn’s list, we’ll most likely head north for a few days as well.  With the time left over we may visit a beach town or maybe we’ll take a quick flight over to Bangkok or somewhere else in Thailand.  The possibilities are almost endless, and that’s what I really love about planning these trips.  So many options.

And here’s what the Vietnam trip looks like for now:

They look the pretty much the same, don’t they?

In the end, this is what the end cost of the two trips will most likely look like without any additional SE Asia flights for the Vietnam trip:

The price will probably jump a bit as we start to add intra-Southeast Asia flights for the Vietnam trip, but not significantly.  It’s was a little bit of work to figure out all of the right flights that were needed, but it was worth the time and effort.  It may seem like a lot of money to some, but when you consider we’re flying long haul business class on one of the top airlines in the world, it’s a pretty good deal.  It’s nothing earth shattering, but I’m pretty excited about it.  Booking similar trips in economy without the ‘deal’ flights would cost about $2400/person.  The normal cost of flying Business class on those same trips would be about $5400/person.

It seems like our list of places we want to visit while living here in Doha is constantly changing (as my mind has a tendency to change quite a bit), but I’m pretty excited that I was able to jump on a deal for a couple of places that were on our travel list from the very beginning.

4 responses to “Cambodia and Vietnam in Style”